My name is Roman Valdes Suarez, son of Francisco and Mercedes Suarez. I am an artist, born in the enchanting island of Cuba.

As a very young boy, my first early memory began on one dark night. While standing alone in my bedroom, by the curtainless window and looking at the myriad of sparkling stars in the sky, I came to a profound and painful realization that one day I must depart this life trough the obscure empty valley of death. Crying, I begged the gods in a desperate agony to not let me die!

That night I realized that my life here on earth is a precious and limited gift,  and that I should enjoy the beauty of my temporary path. The generous gods provided me with another most marvelous and precious gift: Imagination!

So I began living on a ride of imagenary life that became my magical tool to escape to an eternal life. And this is how “The King Of The Mask” was born, in a world of fantasy, something that no toy or game can surpass. For ten glorious years I played and danced on a daily imaginary grandious scenarios and dramatic fantasy adventures, that can only exist in the imagimation of a child obsessed with beauty, life and death.

My mother, a passionate lover of beauty herself embraced and enhanced my chilhood  through puppet shows, colorful gardens, and the observation and appreciation of nature and the arts.

I crowned and named myself the luckiest boy on earth: “The Boy King” and" The King of the Mask. When I was 10 years old, we left the enchanted island of Cuba for the red carpet poppy fields of Spain full of playful butterflies and herds of snow white lambs. I was under a spell in my new surroundings among the colorful little birds flying out of the high dry grass fileds to the cloudless bright blue sky.

Soon after, like a sweet melody that ends too short, I found myself arriving to the United States, on Halloween day! Here I was an never ending spectator, a foreigner, a stranger, with solely a crown and a mask - my only shield, not understanding my surroundings and the language.

Out of my crown I pulled the key of my imagination locking myself to freedom. I opened the gates of my kingdom again and found myself “Living”.

My teenage life began in a dark basement in my parents house with a theatrical transformation. I painted the walls with a crowd of elegant spectators, built several stages and puppets that performed daily, with no need for social life or friends. My duty became to make my theater of life to come to life, so that “The King of the Mask” can perform his royal fantasy. The outside energies were too powerful and oppressing the walls that  protected the kingdom.  “The King “ beacame confused and dissatisfied in a lonely battle, hiding behind the draperies on melancholy.

I painted a sailboat which I wished to sail me far away from my prison and refuge. My solitude grew to angwish and drove me to dress up in my black velvet suit and walk out of the prison and go the sea side to drown myself and all my creations, and to terminate the gods' most precious gift, my life.

While drowning all my images and creations under the quiet bed of water to destroy all traces of  my exitence, a most beautiful and strong wind stopped me from terminating the body that carried my soul, and as it took me through the starless night on a endless journey  in search to the end of the world loosing track of distance and time, I passed away in exhaustion.

Somehow as time moved on, and by the will of destiny, I became a young adult not understading the way of the outside world. I continued to celabrate “ life” with “The King of the Mask”, where I created a studio on the third floor o my house where my patrons, the gods and godesses were my only spectators.  It is there where I developed my life as a visual artist. In a studio where I was both the master and the apprentice, whith one gold chair for a rare outside visitor to enlighten.I painted day and night with no track of time, for time is cruel and robing precious seconds of existance, and my only companion: classical music.

The king’s decided to share his kingdom to the world. I paintied the image of the king, the creatures, the gods and the godesses, for the first time revealing to the world the king of the mask and his world. For now the king was no more a child but and adult.

Many found the image of “The King of the Mask” intriguing,  acquarying him to their life.

“The King of the Mask” paintings had numerous exhibitions, but not until he entered the city of arts: Paris, is when many were possesed by his mysterious and magical world.

Now the king, a child who was afraid of death, realised life would be eternal through  beauty and creation.

Not to forget the joy of chilhood,  my love for children sored to the streets where the king was expresing himself among thousands of people of all ages with “The King of the Mask” puppet theatre. It was an extravagant carnival and a theatrical spectacular where I met my soulmate, Eliza Valdes. After our wedding in Paris we created a landmark puppet theater in Hicksville, NY, to enchant and entertain the children with not only puppets and puppet plays, but with all my artistic creations. Now, as a child of more than 5 decades old, a new light is illuminating the king and his world with new paintings, movies and books."

A new era of "The King of the Mask" is coming - a grandioso fantasy expressions of his mature life in new series of paintings. 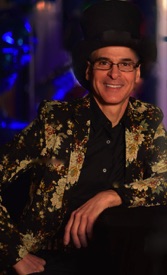